Cambridge Quaker Earthcare Witness (CQEW) works to deepen awareness of our spiritual and physical unity with nature through a ministry of education (forums, speakers, readings, and discussions), activities (hikes, nature walks, and local earth-healing projects), and nurturing community. CQEW meets at 6pm for a bag supper and business on the first Monday of the month in the Friends Center at FMC. Our 2014 Annual Report and our 2015-16 Annual Report list our many activities. 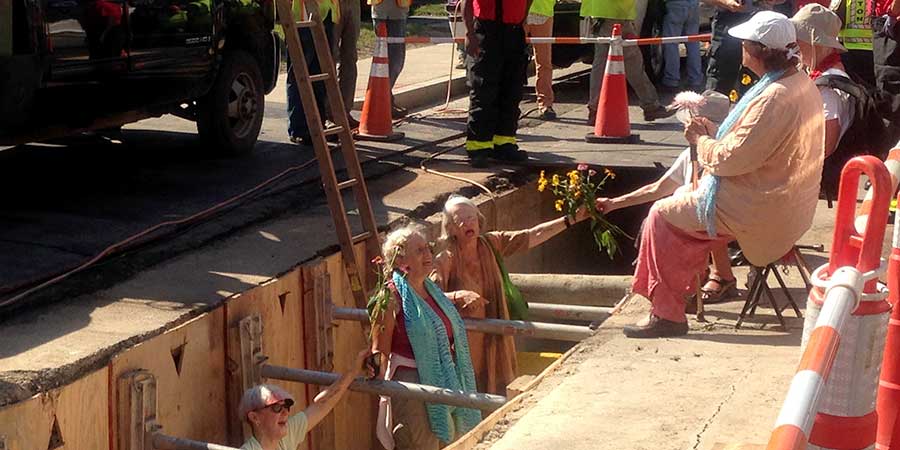 For many of us, erratic weather patterns and warm temperatures of the summer are stark reminders of the reality of climate change. Cambridge Friends work for climate justice in myriad ways, individually and collectively, on levels recognized and invisible. As part of this work, this summer a number of people from our faith community joined with other local Boston area residents in ongoing protests of the West Roxbury lateral pipeline. Each person brought individual gifts to these actions, with some Friends from Cambridge participating in civil disobedience, others providing support to individuals risking arrest, and still others lending their creative talents to spread news of events through images and words.

A Quaker-led vigil was held on November 10, 2015, at the construction site of Spectra Energy’s high-pressure lateral gas pipeline in West Roxbury. We oppose development of infrastructure that will support continued use of fossil fuels. Six of us, from several Meetings, were arrested for disorderly conduct. Gently hauled away in a police wagon, we were then released on personal recognizance. Over 20 other supporters were with us who weren’t risking arrest. I know many more of you were with us in spirit. Our numbers were augmented by neighbors who regularly protest at the site. They are particularly upset at Spectra’s decision to put a high-pressured gas regulating system in a residential neighborhood right next to an active quarry where dynamiting occurs regularly.

Praying and singing over the freshly-laid pipeline was a powerful experience for me. I felt our small action, which briefly stopped construction, was another drop in the bucket of efforts to slow our climate change, and to fight for justice for all those disproportionately affected by our reliance on fossil fuel. I was grateful to be in a community of Quakers raising our hearts and voices together. 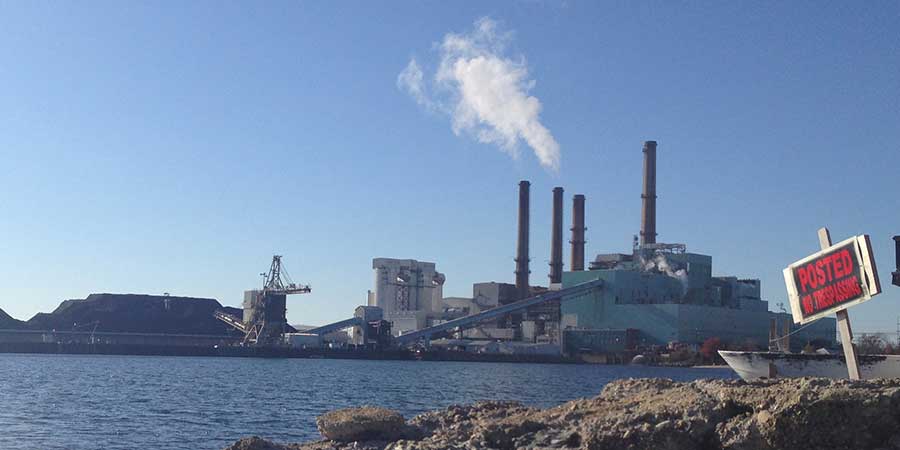 From an article on Brayton Point “Pray In” in the eco/RI news for Southern New England.

A group of about 20 people — mostly Friends (Quakers) from The Religious Society of Friends in Cambridge — gathered for worship at the gate to the Brayton Point Electric Plant in Somerset, MA on Saturday afternoon, December 6. Despite a cold drizzle, they remained seated in their circle at the gates of the facility on Brayton Road, currently being sold to Dynergy by Energy Capitol Partners. In Quaker terminology, they were giving “witness” to the global climate disruption that science has shown to be largely caused by burning fossil fuel. They were calling attention to the prediction that – without massive action — Earth’s temperature will likely rise another 4 to 6 degrees Celsius and cause unimaginably horrific global calamity.

A printed statement explained their purpose:

“Consistent with our spiritual leadings, we are compelled to act and “witness to” the excessive burning of fossil fuels that are despoiling the earth and its atmosphere. Brayton Point and other fossil fuel plants have had cumulatively devastating effects on all Creation; we believe it is immoral to stand by while climate disruption causes harrowing havoc worldwide.”

Members of the group held signs saying “STOP BURNING FOSSIL FUELS NOW” as they worshipped. The cold and rain did not dissuade them from several hours of prayerful ‘witness’. Though several were willing to be arrested for trespassing, the local police and Brayton representatives allowed the witness to proceed on their private land. This was the same day that other Quaker members of EQAT (Earth Quaker Action Team) from Florida to Pennsylvania (and in about 6 other states) witnessed in protest to the Appalachian mountaintop removal currently financed by the PNC Bank.

One of the Cambridge Quakers, Minga Claggett-Borne commented: “We want to act on local issues that also speak to global problems. Praying on the power plant’s property is illegal. Knowing this, I and others feel a higher calling-that addressing the devastation of coal plants is a matter of necessity. God is asking us to take risks and move out of our comfort zone. I can’t stand by watching carbon emissions destroy our biosphere.”

Several of the group proceeded to the Fall River Courthouse, where they continued the “witness” by holding the “Stop Burning Fossile Fuels NOW” sign and passing out information leaflets as the vibrant and well-attended Fall River Christmas parade went down Main St. The courthouse was the scene of the September “Lobster Boat” non-trial, where the District Attorney, Sam Sutter, declined to proceed with action against two lobster boating demonstrators, Jay O’Hara and Ken Ward. Afloat, and as a non-violent act of conscience, they detained a barge from delivering 40,000 tons of coal to the Brayton Point generator. O’Hara is a Quaker from Falmouth,MA, and both he and Ward joined the witness today.

The Cambridge Quakers are moved to persist in prayerful actions of this sort in Eastern Massachusetts. For several hundred years Quakers have had a tradition of non-violent, public witnessing of concerns that rouse their inner moral outrage. Today they regard the heedless despoliation of Creation as profoundly immoral 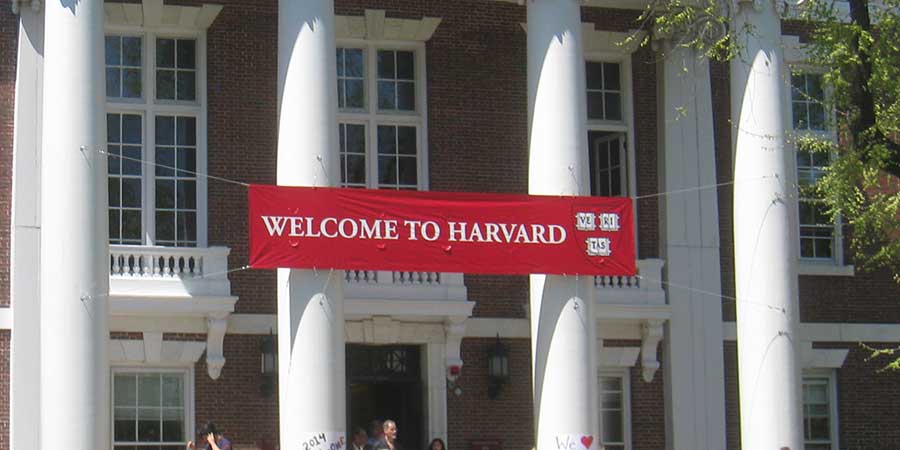 Nancy Cirillo and Mary Coelho and several others from Friends Meeting at Cambridge were part of “faith day” of Harvard Heat Week. About one hundred people from different traditions were there for an hour long program to support the students who were blocking access to Mass Hall where President Drew Faust has her office. The students were asking that Harvard divest from fossil fuels. We sang and chanted in between each of the talks given by local clergy people. The main speaker was Tim De Christopher (bidder 70) of Harvard Divinity School. In addition to its investments in fossil fuels, De Christopher pointed out the ways that Harvard, like most of the culture, is deeply involved in a culture dependent on fossil fuels. It was a moving picture of a dangerous and troubling situation.

Reports from the United Nations 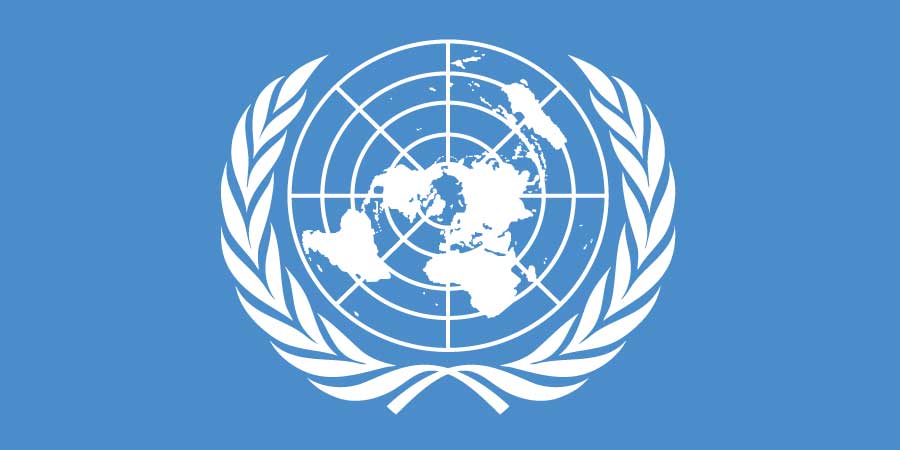 Mary Gilbert, a member of Cambridge Quaker Earthcare Witness Committee (CQEW), also serves on the Steering Committee of the larger Quaker Earthcare Witness (QEW), which is made up of individuals, Quaker Monthly Meetings and Churches, and Yearly Meetings from across the US and Canada. On behalf of QEW Mary has been attending UN meetings in New York City and other places, and reporting back in the form of articles published in QEW’s on-line and hard copy newsletter BeFriending Creation. This link will take you to the on-line issue of Befriending Creation for November -December of 2014, that has coverage of the Peoples March on Climate Change of last September that several FMC members attended. Mary’s next article is in the March-April issue. It covers a meeting she attended in Bonn in January on Bio-Diversity and Eco-system Services. In April, 2015, Mary wrote about “Measuring What Matters.” Mary’s article of July 1, 2015, for Befriending Creation is on “Being a Player.” She writes that she’s been attending meetings at the UN for over 15 years, and has often been asked “Do you ever get to “speak” at the UN?” “What do you say?”